Webbplatsen använder cookies för att säkerställa att du får den bästa upplevelsen. We and selected partners use cookies or similar technologies to ensure you get the best experience on the Teamtailor website. With respect to cookies that are not considered necessary (as specified in the Cookie Policy), we and our selected partners may use cookies for the following purposes: personalized website experience, develop and improve products and in some cases targeted advertisement that are based on your interests. You can manage or disable cookies by clicking on "Manage cookies" at the bottom of each website page.

When you visit this website, it may store or retrieve information on your browser, mostly in the form of cookies. This information might be about you, your preferences or your device and is mostly used to make the website work as you expect it to. The information does not usually directly identify you, but it can give you a more personalized web experience. Because we respect your right to privacy, you can choose not to allow some types of cookies. Below is a list of different categories of cookies that may be set and that you can freely change. However, blocking some types of cookies may impact your experience of the site and the services we are able to offer.

Once upon a time there was a metric system with unit prefixes denoting multiples. A kilo (k) was a thousand, a giga (G) was a million and a tera (T) was a billion (1 000 000 000). All was well in the standardization committees.

Then along came the computer people and invented machines that contained bits (b) and bytes (B) and needed a way of denoting multiples there as well. They found the metric systems unit prefixes and given that 210 = 1 024 which for most practical purposes is pretty much the same as a thousand, and that it was friday afternoon and they all wanted to go home and program their computers, they borrowed the metric systems unit prefixes and went home.

Darkness descended on the lands as the answer to the question “How much is a kilo?” now had the very unsatisfactory response of “It depends”. For most units it meant a thousand but for the bits and bytes of the computer people it meant 1 024.

The success of the bits and the bytes meant that the people requested more and more from the computer people and kilos and mega was not enough anymore. Giga and tera started to be common and more advanced users used peta (1012) and exa (1015). The computer people started to worry because the larger the units, the more the metric systems prefixes differed from their version and the difference was no longer negligible. For kilo the difference is only 2,4% (1 024 versus 1 000) but for giga the difference is already 7,3% (1 073 741 824 versus 1 000 000 000).

The worried computer people and the frustrated standardization committees met to discuss this and after much head scratching agreed on a new system, the ibi-byte. The system contained new unit prefixes very similar to the unit prefixes used in the metric system, but based on powers of 2 instead of the decimal system. A kilobyte was thereafter redefined as 1 000 bytes and a kibibyte was introduced to mean 1 024 bytes. See table below for all units. 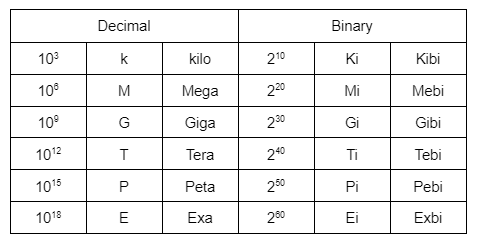 The standardization committee was happy that the metric units prefixes once again had a single, definitive meaning. A kilo was always a thousand, regardless of the unit. And the computer people were happy as they could still use the binary system for their bits and bytes. And there was much rejoicing.

For most people though, this change was not noticed. But if you look closely at a download speed you might notice the small i nestled between the M or G and the B and hear the faint cheers of the standardization committees and the computer people.

NB: This is probably not at all how it happened, since I made the story up, but the system exists and a kilobyte is now actually 1 000 bytes instead of 1 024 (which is now called a Kibibyte). For more real information about this see here and here.